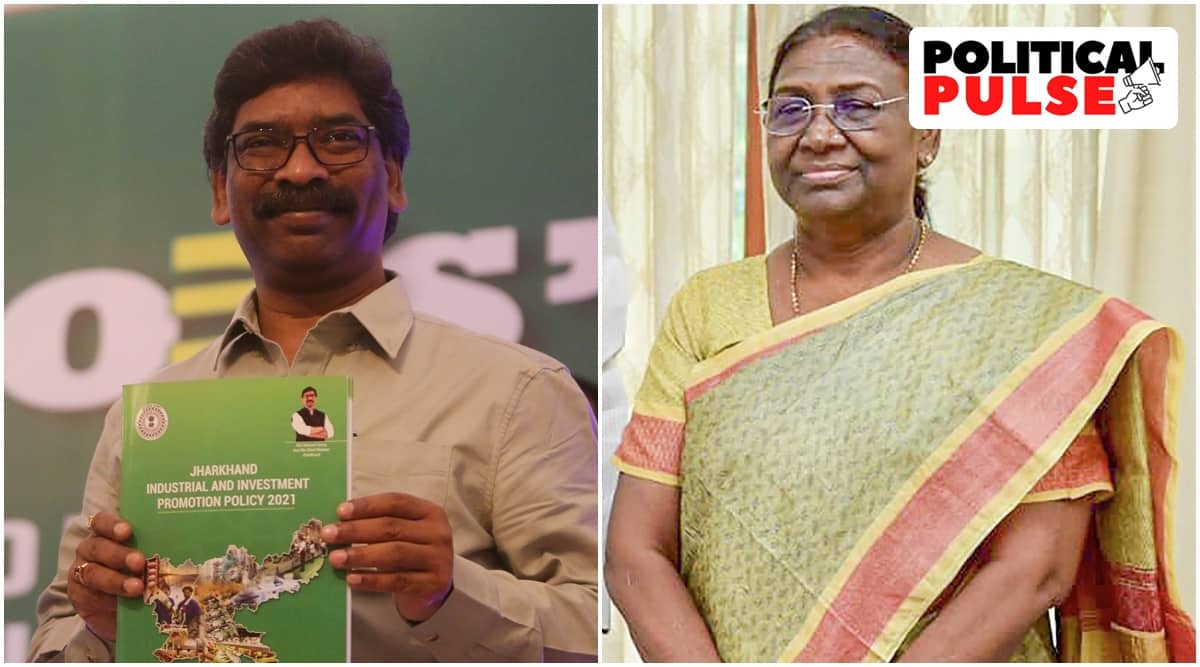 The Jharkhand Mukti Morcha (JMM), led by its executive president and Chief Minister Hemant Soren, may be among the 17 Opposition parties, which nominated Yashwant Sinha on June 21 as their joint candidate for the July 18 Presidential election, but the tribal party seems all set to review its position and back the ruling BJP-led NDA’s Presidential nominee, Droupadi Murmu.

The former Jharkhand governor, Murmu is on course to be elected as the next President, the first tribal to assume the country’s highest constitutional office.

The NDA’s move to name the 64-year-old Santhal leader Murmu as its Presidential candidate has put the JMM in a spot, which draws its electoral strength from tribal votes in Jharkhand, which it is ruling at the head of a coalition that includes the Congress and the RJD. The Shibu Soren-headed JMM clearly does not want to be seen as a party which despite its tribal credentials did not back the “historic move” to send the first tribal to the Rashtrapati Bhavan.

With the Odisha CM Naveen Patnaik-led BJD backing Murmu’s candidature, she is set to have a smooth sailing in the Presidential poll, even as the ex-Prime Minister and JD (S) chief HD Deve Gowda has also indicated his party’s backing for her.

Sources in the JMM said the party will hold a meeting of all its MLAs on Saturday to review their stand on the issue of the Presidential candidate and make a decision. A party insider said: “There is no harm if Hemant Soren supports Murmu’s Presidential candidacy as numbers are heavily stacked in her favor. And Soren wants to be seen as the person who has supported a tribal candidate for the President’s post. Most likely the JMM will vote for Murmu. ”

A two-time MLA from the Rairangpur (ST-reserved) Assembly constituency during 2000-2009, Droupadi served as the Jharkhand governor from 2015 to 2021, becoming the state’s first governor to complete the five-year tenure. She was also Jharkhand’s first woman and tribal governor.

The JMM has been a key player of Jharkhand politics, with its co-founder Shibu Soren belonging to the Santhal community, which makes up 50 per cent of the state’s tribal population besides accounting for a significant percentage of the tribal population in neigbouring states, such as West Bengal, Chhattisgarh and Odisha, too.

Following its loss of tribal seats in Jharkhand in the 2019 Assembly elections, the BJP moved to re-induct Babulal Marandi, the state’s first CM, to the party fold, in order to woo the tribal communities. A number of observers have linked the BJP’s decision to pick Murmu as the NDA’s Presidential candidate to its bid to make an outreach to tribals across the country.

A tribal expert, who was part of the previous BJP-led Jharkhand government and is also close to the incumbent JMM-led government, said: “With the Soren government uniting tribals, both Christians and Sarna, with the passage of the Sarna Code resolution , the BJP’s move, with reference to Jharkhand, is to split Santhali sentiments. At the same time Murmu is a very compassionate and accessible person, who believes in better communication with people taking them into confidence. ”