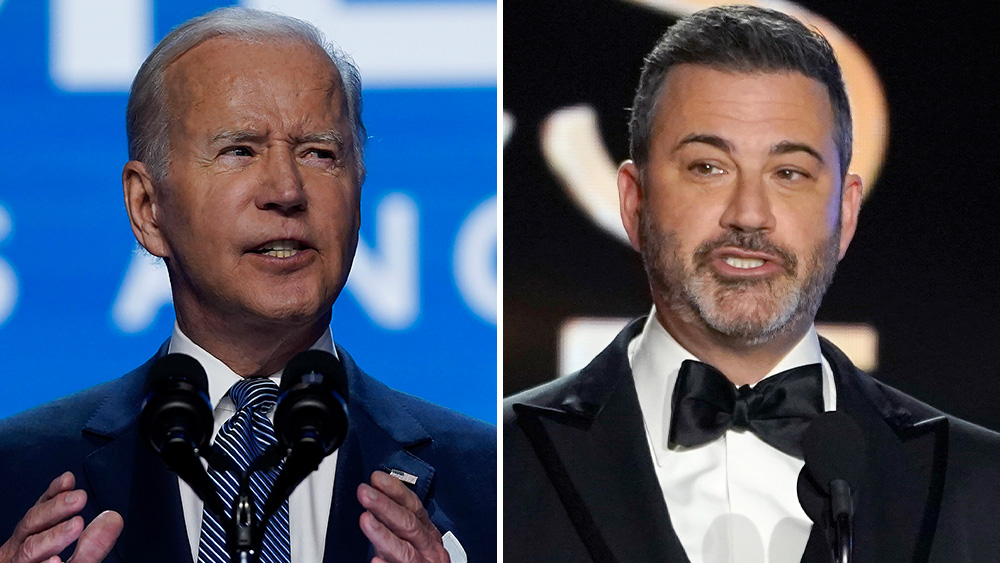 UPDATE, 9:05 PM PT: The Boston Celtics are now ahead 2-1 in their NBA Finals series against the Golden State Warriors after tonight’s win at home, but the biggest player around was actually out on the West Coast on Wednesday.

In his first live in-studio appearance since taking off last year in the midst of a global pandemic, President Joe Biden sat down today in the City of Angels with Jimmy Kimmel. Watch the full nearly 24-minute interview above.

The interview showed why the White House has turned to late night to get its message out: Biden was facing friendly questions, in a relaxed environment, from a host who is in sync with him on a number of issues.

Biden also was allowed to make the case for his administration’s accomplishments on climate and the economy, while acknowledging that “inflation is the bane of our existence.” When it comes to the price of gasoline, Biden pinned the blame on oil companies for not exercising oil leases already in place, telling Kimmel, “they make more money not drilling and buying back their own stock.”

The president also suggested that the White House has not been able to communicate its message in a way that pierces through the daily noise, while also pointing to changes in the media landscape in which reporters “have to get the clicks on the nightly news.”

“Everything gets sensationalized in ways… but I am convinced we can get through this. We have to get through it. ”

He also warned of the Supreme Court overturning Roe vs. Wade, as expected, and some states imposed limitations. “They are going to cause a mini revolution and they are going to vote a lot of folks out of office,” Biden said.

Kimmel also tried to riff a bit with Biden on Republicans’ shift to the right.

“We got to send them to jail. That little box, ”Biden quipped.

Biden last visited Kimmel in 2019, but this was his first in studio appearance, on any late-night talk show, since becoming president. He visited Jimmy Fallon’s Tonight Show in December, but the guest spot did not have as much impact because it was virtual. But unlike Trump, who shunned and slammed late-night hosts during his presidency, Biden likely will return to the format again and again. The Fallon and Kimmel interviews were hardly hardball Q & As, and the president already had a rapport with Stephen Colbert of The Late Show, although he has yet to do a guest spot. Do not be surprised if he does.

PREVIOUSLY, 8:07 PM PT: “What I do not want to do, and I’m not being facetious, is I do not want to emulate Trump’s abuse of the Constitution, and constitutional authority,” President Joe Biden told Jimmy Kimmel today of why he has not inked an Executive Order to try to stop the murderous gun violence that America has tragically seen in Buffalo and Uvalde, Texas, to name a few, in recent weeks.

“I often get asked, well the Republicans do not play it square, why do you play it square,” Biden added in his first live in-studio late night sit-down since taking office in January 2021. “Well, guess what ? If we do the same thing they do, our democracy will literally be in jeopardy, ”he went on to tell an agreeing Kimmel in what was not an entirely unexpected exchange.

With a Monopoly shout-out in the cards, take a preview peek at POTUDS on Jimmy Kimmel Live! below:

President @JoeBiden on issuing an Executive Order in response to gun violence… pic.twitter.com/KUXsyNfZrW

Flying in from DC for a four-day visit to the Southland, Biden today went straight from handshakes with the Governor and the Mayor on the LAX tarmac to Hollywood to tape Kimmel. Arriving at the El Capitan just after 2:30 PM PT, the President’s security net saw Hollywood and Highland under lockdown for the hour or so Biden was in the studio with the ABC late nighter. Bookending the third game of the 2022 NBA Finals, the Kimmel chat with President Biden airs at 11:30 PM ET tonight

As these pics below show, First Lady Dr. Jill Biden was there in-studio too today:

After filming Kimmel, the Bidens whipped to DTLA for the official opening of the ninth Summit of the Americas. POTUS has a pretty full dance card at the regional gathering, on and off site. In addition, Biden is strolling over the Hollywood ATM for a double dip on this trip out West. No stranger to exacting Tinseltown A-listers from their cash, the President has two deep pocket DNC ​​fundraisers set for June 10.

The first event over on the westside is an intimate gathering of high rollers. With tickets ranging from $ 1000 to $ 35,000, the second fundraiser is at Haim and Cheryl Saban’s Beverly Hills pad.

Unleashing the City of Angels from the BidenJam that comes from a Presidential visit, Biden will split LA on Saturday morning. Staying out West a bit long, POTUS is traveling to New Mexico from California – let them battle the traffic.