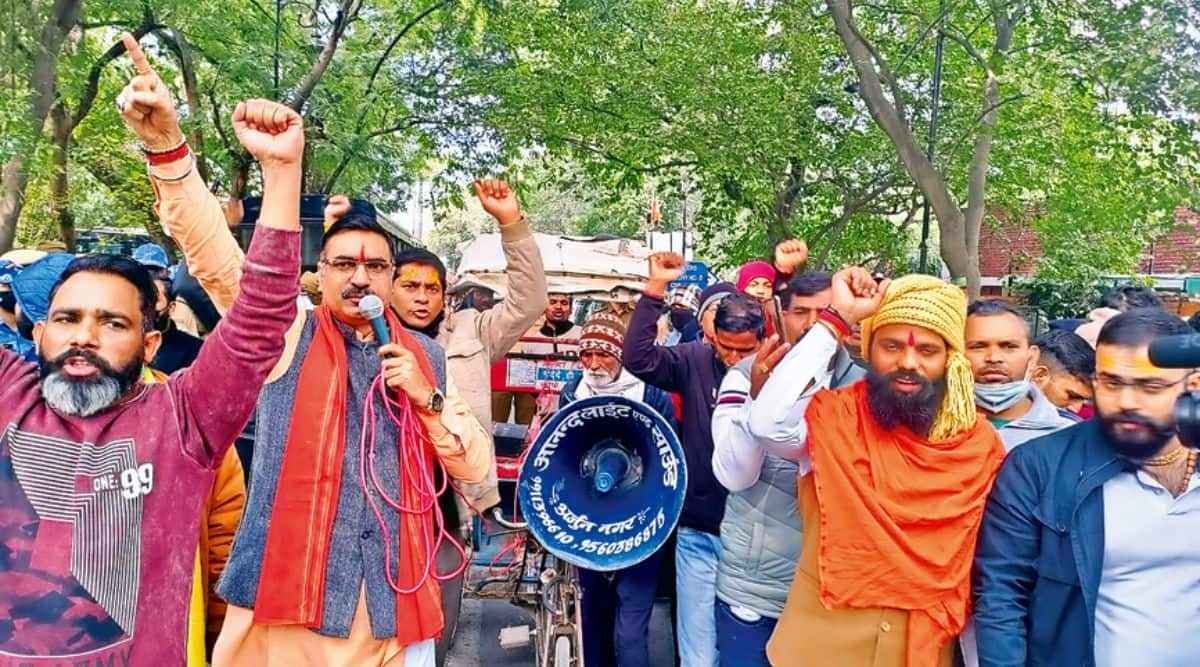 The protest march was led by Kulbhushan Bhardwaj, legal adviser to Sanyukt Hindu Sangharsh Samiti, a conglomerate of 22 local groups who have been protesting every Friday against namaz being held in public spaces in Gurgaon.

Friday’s march included Narender Singh Pahari, a former RSS and BJP leader who had led a group that interrupted a Christmas Eve party at a school last week in Pataudi, claiming religious conversion.

Mahavir Bhardwaj, President of Sanyukt Hindu Sangharsh Samiti-Haryana, who had attended the ‘Dharam Sansad’ in Haridwar, where several participants including Kalicharan had given hate speech, also took part in the protest.

During the march, chants of “Nathuram Godse amar rahein (Long Live Gods)” and “Gods saved the nation” and calls for violence were raised as protesters gathered near the Deputy Commissioner’s residence at Civil Lines before marching to DC’s office in the middle of a large police presence. . The group included members of the Gau Rakshak Dal from Manesar, Bajrang Dal and Hindu Sena.

Bhardwaj, a former president of the Gurgaon District Bar Association who had defended a 19-year-old man who had shot at anti-CAA protesters near Jamia Millia Islamia in 2019, said they had submitted a memorandum to the president at DC’s office , with a requirement for “immediate release” of Kalicharan.

“We strongly support Sant Kalicharan’s remarks against Gandhi and condemn how the Chhattisgarh government arrested him. Since the country was divided on the basis of religion, why did not Gandhi oppose it? This country will never forgive Gandhi for his role in accepting the division. “The Hindu community has woken up and we will not accept any insult to our saints,” he said.

Bhardwaj was suspended from the BJP for anti-party activities in 2020 and has spearheaded protests against namaz in open areas in Gugaon’s sector 47 and sector 12. He was among the 26 people arrested on October 29 for try to disrupt namaz in sector 12 A., and later released on bail.

Pahari, who had unsuccessfully contested the 2019 election of Pataudi as an independent candidate, said: “When someone talks about a Hindu nation and Hindu interests, there is an immediate FIR and arrest, while others go free.”

Bhardwaj, who had attended the Haridwar event, said: “This insult (arrest of Kalicharan) is a way to challenge Hindu society. He (Kalicharan) did not say anything that should be punishable by law. Because of pressure created “by some traitors he has been arrested. Hindu society should not be provoked into a situation where it becomes a matter of law and order.”

When the protesters demanded action against AIMIM chief Asaduddin Owaisi, the protesters declared a reward of Rs 22 lakh to “any police officer in the country who would arrest him”. “The authorities have not taken any action against Owaisi, who has threatened and incited Hindus in his speeches,” said Parveen Yadav, who was also among those who disrupted the namaz in Gurgaon in recent weeks.

The memorandum, which was sent to a tehsildar at the mini-secretariat, said: “We, the people of Gurgaon, are against the arrest of Sant Kalicharan. The probe has been one-sided in this matter. While Owaisi has used harsh remarks against Hindus and the police, no action has been taken against him.Through this memorandum, we appeal to the President to immediately dismiss the case against him (Kalicharan).

Yash Garg, DC Gurgaon, did not respond to requests for comment.

At Prakash, SHO, Civil Lines, said: “A group of people marched to the DC office and handed in a memorandum. The situation was peaceful. We have not received any complaint about the alleged slogan at the march and no suo motu action has been taken . “