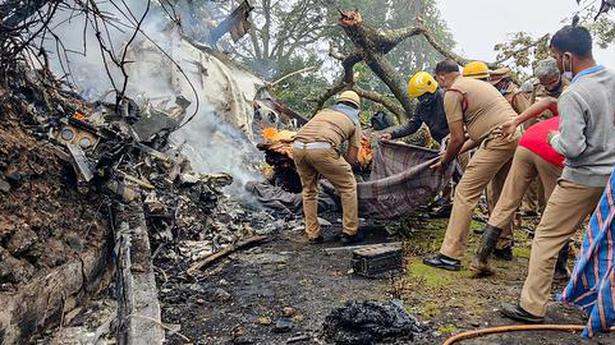 The results are sent for legal review, after which they will be submitted to the government

The three-service investigation ordered into the fateful helicopter crash that killed Chief of Defense (CDS) Gen. Bipin Rawat and others, are complete with officials indicating the probable cause of Controlled Flight Into Terrain (CFIT). The results have been sent for legal review, after which the report will be submitted to the government, a defense attorney said on condition of anonymity.

‘The results have been sent for legal investigation. It will take about 10 to 15 days to complete, “the official said Friday.

Two officials familiar with the matter said CFIT was the most likely cause of the crash and that the investigation report, once submitted, would shed more light on it.

The Indian Air Force (IAF) Mi-17V5 helicopter with General Rawat, his wife Madhulika Rawat and 12 others including his staff, pilots and crew was on their way to Defense Services Staff College, Wellington, from Sulur on December 8 when it crashed in Nilgris in Tamil Nadu close to destination. A three-service investigation was ordered by the IAF led by Air Marshal Manvendra Singh, Air Force commander-in-chief training command to investigate the crash.

As part of the study, the Flight Data Recorder (FDR) as well as the Cockpit Voice Recorder (CVR) were recovered and sent for analysis to reconstruct the last moments before the crash.

CFIT means the pilot has full control of the aircraft, but due to erroneous situational awareness, the aircraft hits the terrain, explained Air Vice Marshal Manmohan Bahadur (Retd), a former helicopter pilot.

“An example could be an airplane flying over a large body of water and hitting it due to lack of depth perception. A similar strike could happen over snow,” he said, elaborating on what CFIT means.

A CFIT means the helicopter was fully operational and the instruments are in order, said a senior army pilot who has flown a lot in the mountain. The crash is likely due to loss of situational awareness and disorientation, which in most cases is due to bad weather, he said.

The US Federal Aviation Administration (FAA) defines CFIT as an unintentional collision with terrain (the ground, a mountain, a body of water, or an obstacle) while an aircraft is under positive control. “Most often, the pilot or crew is unaware of the impending disaster before it is too late. CFIT most often occurs during the approach or landing phase of the flight,” the FAA fact sheet states.