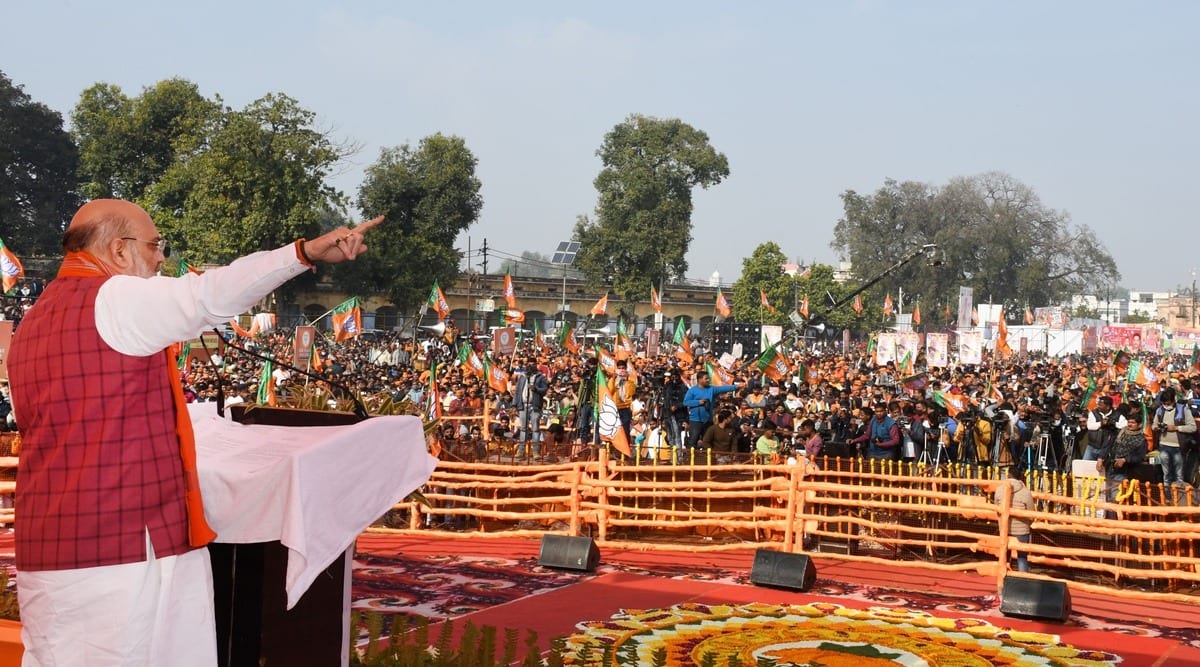 Union Interior Minister Amit Shah launched a crippling attack from the temple city of Ayodhya and on Friday dared the opposition parties to stop the construction of the Ram Temple and asked people responsible for holding “Ram Lalla in a tent”.

Speaking at a public meeting after visiting the Ram Temple under construction, Shah claimed that Narendra Modi The government of the Center and Yogi Adityanath’s of the state had, unlike previous SP and BSP governments, restored pride in the faith. He asked people not to forget those who ordered shooting at ‘kar sevaks’.

dam nahi (They wanted to stop construction, I will tell them if they

if you want to stop, then stop. No one can dare to stop it), Shah said, adding that a university and a proposed international airport in Ayodhya would be named after Lord Ram.

The Union minister asked the audience to think about why “Ram Lalla has had to live in a tent so far? Who has stopped construction so far? Who stopped the Ram Navami celebrations? Who stopped Deepotsav? Who ordered canecharge on Ram Bhaktas?”

In addition to visiting the construction site, Shah, along with Nritya Gopal Das, the leader of Shri Ram Janmabhoomi Teerth Kshetra, who oversees the construction of the Ram Temple, also reviewed other development projects in Ayodhya. At Ram Temple Square, Shah sought blessings for Prime Minister Yogi Adityanath and prayed for BJP‘s victory in the upcoming assembly polls.

On recent UP raids on businessmen, Shah wondered why SP chief Akhilesh Yadav was uneasy (Bhai Akhilesh apko kya taklif hai?) And claimed that the smell of “Samajwadi itra” spread throughout the state.

“Aaj jab raidain chal rahi hain til unke pet mein gubar ho raha hai …
dalni chahiye ki nahi chahiye? “Raids are taking place today. Why are they uneasy? Friends, are you uneasy? Do you feel that those who have acquired black money should be raided? Do you feel that Modiji should order such raids?” Shah asked the audience. .

Shah continued his attack on Akhilesh, daring him to roll back Article 370, which gave special status to Jammu and Kashmir, and triple talaq. “Akhilesh Babu, if your second generation comes too, neither Article 370 will come back nor the triple talaq,” Shah said. In 2019, the central government scrapped Article 370 and divided the state into two union areas.

Shah said there used to be three “P’s” under the SP government – “pariwarvaad”, “pakshpaat” and “palayan” – and today there were three “V’s” “vikas, vyapar” and “Sanskrit” virasat “. Ayodhya was the greatest example of the three Vs, he said.

With a list of development work carried out by the BJP government in Ayodhya and other cities, Shah said a medical college would be named after Raja Dasharath, father of Lord Ram.

The Union minister praised Adityanath for freeing the state from the “mafia rule” and Modi for preventing terrorists from entering the country from Pakistan.