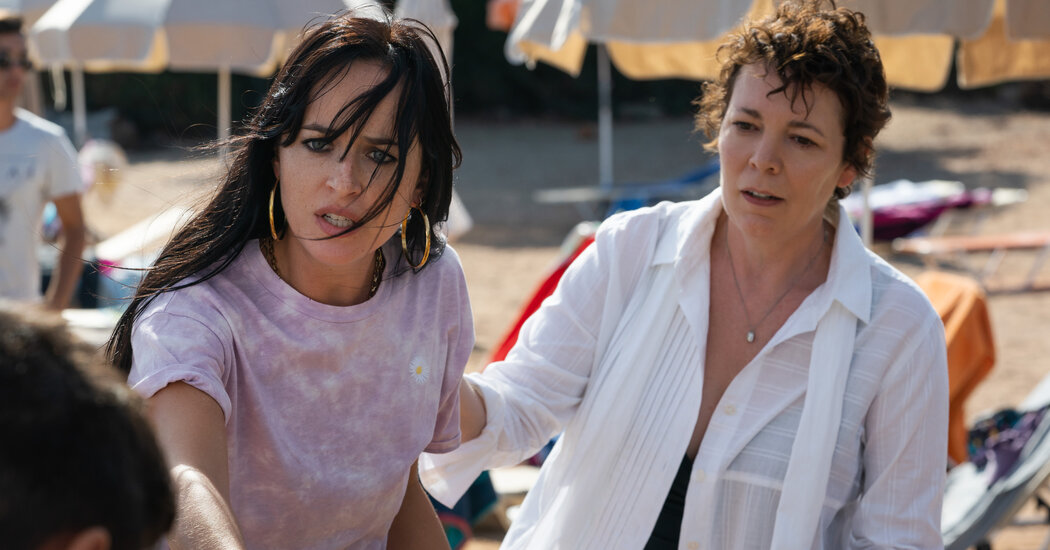 Draped in a touch of melancholy that more than fulfills the promise of its title, “The Lost Daughter” – Maggie Gyllenhaal’s seductive first feature as a director – is a film full of characters. These begin to emerge almost instantly when Leda (Olivia Colman), a gifted professor of comparative literature, begins a Greek island vacation, filled with books and scientific intentions.

It’s not just the bowl of moldy fruit that ruins her charming beach rental, or the moaning foghorn and the flashing lighthouse lantern that Lyle (Ed Harris), the apartment’s caretaker, assures her she’s only going to be the occasional annoyance. That guarantee turns out not to apply to the large and noisy American family who one day invade Leda’s idyllic beach, and whose heavily pregnant matriarch, Callie (Dagmara Dominczyk), asks her to move her chair. Leda refuses, and there is a short, tense standoff; for the first time, we sense something steely and resolute in Leda, which until now has appeared politely pleasant. We do not know who Leda is, but we are suddenly in the process of finding out.

Adapted by Gyllenhaal from Elena Ferrante’s novel of the same name from 2006, “The Lost Daughter” is a sophisticated, elusive plot psychological thriller. Drop by drop, a vague sense of threat arises as Leda is drawn by Nina (Dakota Johnson), Callie’s daughter-in-law and the unhappy mother of a fragile little girl.

“They are bad people,” warns Will (Paul Mescal), the friendly Irish student who works at the beach bar. Yet when Leda sees Nina struggling with her child, her eyes fill with tears as she remembers her own frustrations as a young mother of two young daughters, now grown up. In a series of beautifully shaped flashback scenes, we see the young Leda (brilliantly played by Jessie Buckley) try to work while struggling with her children’s endless demands and the ignorance of her helpless husband (Jack Farthing). A brief, miraculous escape to an academic conference reveals both the weight of her intellect and the overwhelming sexiness of its recognition of a charismatic colleague (entertainingly played by Gyllenhaal’s husband, Peter Sarsgaard).

Yet only a cursory reading of “The Missing Daughter” would describe it as a meditation on the twins of children and careers. It is instead a dark and deeply disturbing exploration of something much more raw and even radical: the notion that motherhood can plunder the self in irreparable ways.

“Children are a crushing responsibility,” Leda tells Callie at one point, Colman’s steady gaze and adjective weight only increase her character’s appeal. In its whimsical whimsy and emotional intricacies, the film weaves an atmosphere of nerve-wracking mystery. This is significantly enhanced by Hélène Louwart’s delicious close-ups, while she dwells, for example, on Nina’s assessing gaze on Leda, as if she were assessing the older woman as a possible ally. But for what?

Although Gyllenhaal can sometimes lean a little heavily on the sinister characters – a worm slipping from a doll’s mouth, a stray pine cone crashing into Leda’s back – she is never thematically distracted and emphasizes how women alone are often supposed to be lonely (by men like cautiously intrusive Lyle), or irrelevant (by women like Callie, complacently supported by her swollen belly and swarming men). At the same time, the film, as if absorbing Leda’s ambiguities, has an uncertain quality that thickens the suspense. So when Leda does something childish and inexplicable, the possibility that the action is also dangerous feels much more real.

Equally worrying and influential, Leda is the epitome of a type of woman whose needs are rarely addressed in mainstream American movies. We do not like her, but we are never allowed to mock her. The film’s empathetic gaze and Colman’s sharp, heartbreaking performance – watching her glow in a lovely dinner scene while sharing intimate memories with Will – bind us to her side. At least Leda does not need our condemnation; she houses more than enough of her own.