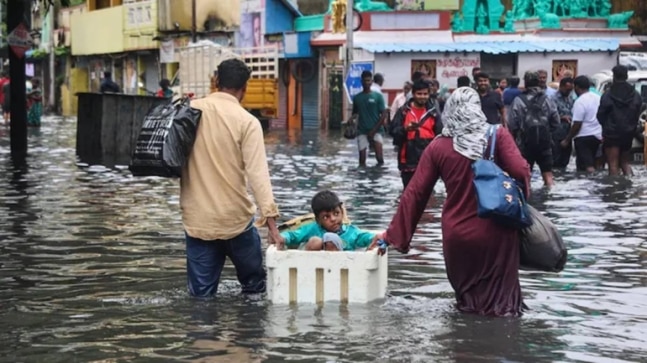 As many as three people were killed due to electric shock in Tamil Nadus Chennai on Thursday. A red warning has been issued to four districts in the state.

As many as three people were killed due to electric shock in Tamil Nadus Chennai on Thursday. The state capital has witnessed extremely heavy rainfall, which has resulted in severe water logging.

The deceased have been identified as 70-year-old Tamilarasi from the Otteri area, a 13-year-old boy in Mylapore and a 45-year-old woman – a UP native in Puliyanthope area of ​​Chennai.

India’s meteorological department has issued a red warning for the Chennai, Tiruvallur, Kanchipuram and Chengalpettu districts of Tamil Nadu. A warning for heavy to extremely heavy rainfall has been issued for the four districts. Earlier, heavy traffic jams were reported from several places in Chennai due to the unexpected rain.

Chennai traffic police have issued a statement saying four subways have been closed and seven areas have been identified with water logging leading to traffic jams.

The Tiruvallur collector in a tweet said: “750 cusecs of water released from Redhill’s tank as a precautionary measure due to persistent rain in the catchment area and the influx is around 2000 cusecs. People living in low-lying areas on the banks of the surplus canal to be on alert.”

750 cusecs are released from Redhill’s tank as a precautionary measure due to persistent rainfall in the catchment area and the influx is around 2000 cusecs. People living in low-lying areas along the banks of the surplus channel must be on alert. #chennairains pic.twitter.com/6vSqjRiRQ8

While it has been reported that 1000 cusecs of water has been released from the Chembrambakkam reservoir.

Meanwhile, the Chennai Metro extended train connections by one hour, i.e. from kl. 23:00 to 12:00 at midnight on December 30th. The last metro train will leave all terminals at 12:00.

The extension has been given to help passengers reach their homes safely as heavy rain whips the city.

Click here for IndiaToday.in’s complete coverage of the coronavirus pandemic.