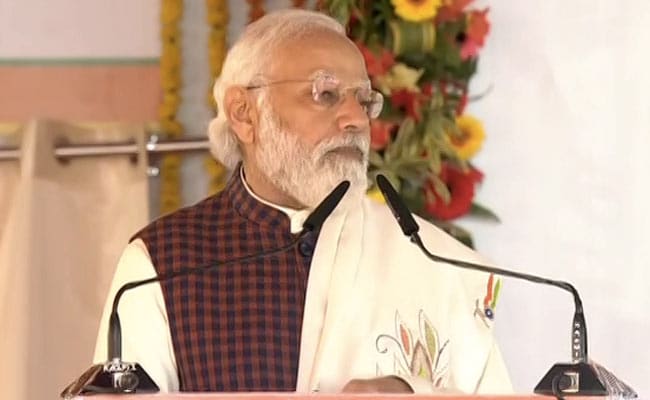 Prime Minister Modi was in UP today to attend a government event.

Prime Minister Narendra Modi ripped off rivals today as he laid the foundation stone for the Rs 36,230 crore Ganga Expressway project in Uttar Pradesh just months ahead of the critical state polls.

“Today … when the mafia faces the bulldozer, the bulldozer is raging illegal construction, but the pain is felt by those who feed them. That’s why people say -“OP + Yogi. Bahut hai Upyogi‘(UP + Yogi is very useful),’ said the Prime Minister at the government event.

His potshot comes on a day when former Prime Minister Akhilesh Yadav’s aides were attacked in various parts of the state, including Mainpuri – Yadav’s stronghold. Shortly after the tax investigations began, Yadav accused the BJP of abusing the central investigative bodies.

“Abhi to the Income Tax Department aaya hai, Enforcement Aayega, CBI aayega ‘ he said in what seemed like a daring to the government.

Hours later, the Prime Minister struck back at the former prime ministers in his speech.

“In the past, how people’s money has been spent, and in what way … you’ve seen it … but today the money from UP is being used for development work. In the past, these projects started on paper so they could fill theirs. projects that your money is saved and is in your pocket, “said Prime Minister Modi.

Amid attacks by opposition leaders over the major launch events in the run-up to the state polls, Prime Minister Modi said: “There are some political parties that have a problem with the country’s heritage and progress .. problem with heritage because they have a voting bank headache. The problem of progress “These people can not make the poor always dependent on them. These people have a problem with Kashi Vishwanath Dham, the Ram Temple in Ayodhya.”

“These people raise questions about the actions of the army, the Make-in-India scheme, the handling of the pandemic … This is a great country, governments come and go … We should be happy for the country’s progress but alas, these people do not think so. “

The six-lane Ganga highway project launched today can be expanded to eight lanes and will be built at a cost of over Rs 36,230 crore.

“The day is not far when UP will be identified as the most modern state with the next generation of infrastructure. The network of motorways in UP, the new airports being built, new railway routes being laid, bring numerous blessings to the people of UP on same time. “, said Prime Minister Modi today.

This afternoon, as Prime Minister Modi launched the big project, Rahul Gandhi chaired an anti-inflation meeting in his former Lok Sabha constituency Amethi, where he criticized the government over various political decisions.