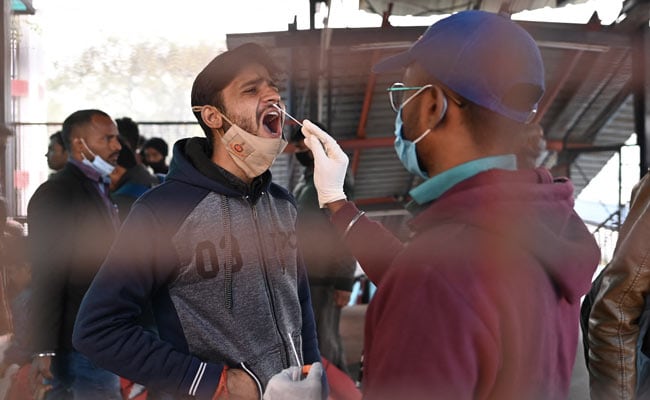 India reported 7,145 new coronavirus cases within the last 24 hours, marginally lower than yesterday’s 7,447 infections, according to the Ministry of Health. In addition, 289 related deaths were also recorded.

The daily positivity rate is currently 0.57% and the weekly positive rate is 0.62%.

The cumulative doses administered so far in the country during the nationwide COVID-19 vaccination effort have exceeded 136.66 crore.

Here are the LIVE updates on coronavirus cases in India:

Another person died of coronavirus in Punjab on Saturday when 28 new cases emerged, bringing the state’s infection rate to 6,03,917, according to a medical bulletin. So far, 16,628 people have died from the infection in the state.

The death toll includes one death that was not previously reported.

Ludhiana, Pathankot and Mohali reported five cases each followed by three each in Hoshiarpur and Jalandhar. The number of active cases was 306.

Forty-two more recovered from the infection, bringing the number of those who have been cured to 5,868,983, according to the bulletin.

Eight more people died within the last 24 hours, increasing the death toll to 19,660. The number of people killed due to coronavirus was seven on Friday.

Of the recent deaths, three were each recorded in Kolkata and the nearby North 24 Parganas district, while two COVID-19 deaths were reported in Nadia.

Nashik Covid figures reached 4.13.206 today after 42 were discovered while a patient’s death took the death toll to 8,745, an official said, the news agency PTI reported. So far, 4,04,041 people have been discharged after recovery, including 55 on Saturday, he said.

151 Covid cases in J&K in 24 hours, one related death
With 151 fresh cases, Jammu and Kashmir’s COVID-19 numbers have risen to 3,39,691, while the death toll due to the viral disease has risen to 4,511 with another death, officials said on Saturday, the news agency PTI reported

Of the new cases, 42 were reported from the Jammu division and 109 from the Kashmir division in the territory of the Union, they added.

Srinagar district recorded the highest number of 55 cases, followed by 17 cases each in Baramulla and Jammu districts, officials said.

Maharashtra couple, 13-year-old daughter found infected with Omicron on return from Uganda
A couple and their 13-year-old daughter have been found infected with Omicron after returning to Maharashtra’s Satara from Uganda, officials said today. Their second daughter, who is five, tested positive for Covid, but not for the variant, the news agency PTI reported. Everyone returned on Dec. 9, state health officials said.

Amid the horror of the new Omicron variant of coronavirus and the Christmas-New Year festival season around the corner, Mumbai’s mayor IS Chahal said people in the big city should avoid crowding hotels, restaurants, cinemas, shopping malls and claiming there are restrictions for attendance for marriages and other functions must be strictly adhered to, the news agency PTI reported.

“Wear a mask properly, get fully vaccinated. A new variant of coronavirus called Omicron is spreading rapidly around the world, straining the health care system. Despite repeated appeals from the government and administration to prevent a likely third wave, it has been observed, that guidelines are not followed properly in most places, especially at wedding parties and other ceremonies, “he said.

The district administration in Palghar, Maharashtra, conducted an experiment in which it used a drone to deliver COVID-19 vaccine doses in a remote village located in rugged terrain, its top official said. The experiment, which was successfully completed on Thursday, is likely the first of its kind in the state, said district collector Dr. Manik Gursal, who coordinated in the experiment.

“As part of the exercise, a batch of 300 vaccines was shipped from Jawhar to Zaap village. The task, which would otherwise have taken more than 40 minutes, was completed in just over nine minutes. The vaccines were delivered at the local public health center,” he said. said the district administration in a statement issued Friday.

The distance between the two points is about 20 km, an official said.

One person died of coronavirus in Ladakh, while 17 new cases pushed the infection rate to 21,903, officials said on Saturday, according to the news agency PTI. The deaths were reported from Leh on Friday, pushing the death toll in the territory of the Union to 217 – 159 in Leh and 58 in Kargil – since the outbreak of the pandemic last year, they said. Of the new cases, 15 were reported from Leh and two from Kargil, officials said, adding that Leh accounts for 18,237 of the total cases, while Kargil has so far registered 3,666 infections. They said 10 coronavirus patients were discharged after successful treatment in Leh, bringing the number of patients cured in Ladakh to 21,513. There are 173 active cases in the territory of the Union -159 in Leh and 14 in Kargil.

Puducherry recorded 17 fresh cases of COVID-19 during the last 24 hours, ending at 1 p.m. 9 on Saturday, which raised the total number of positive cases to 1.29.309, the news agency PTI reported. Puducherry registered six out of the 17 new cases, while Karaikal registered 10 cases, and Mahe reported one. The active cases were 171, of which 29 patients were in hospitals and the remaining 142 were in home isolation, said Director of Health G Sriramulu in a statement. Twenty-three patients recovered and were discharged within the last 24 hours, while the total cures were 1.27.259. No new deaths were reported from any of the four regions of Puducherry, Karaikal, Mahe and Yanam during the last 24 hours, and the death toll remained 1,879.

Thirty COVID-19 patients are currently being treated at various hospitals in Arunachal Pradesh, a senior health official said on Saturday, according to the news agency PTI. The state’s coronavirus number remained unchanged at 55,320 when no new case was reported.

As many as 55,010 people have been cured of the disease so far, including three on Friday, he said, adding that the recovery rate was slightly improved to 99.44% from 99.43% the previous day.

Two COVID-19 patients are currently being treated in the Andaman and Nicobar Islands, a health bulletin said on Saturday, according to the news agency PTI. The number of COVID-19 cases in the territory of the Union remained unchanged at 7,700 as no new infection was detected. A total of 7,569 people have been cured of the disease so far, including one on Friday, and 129 patients have succumbed to the infection to date, it said.

Australia reported record-breaking new COVID-19 cases on Saturday for a third day, with outbreaks growing in the two most populous states, but Prime Minister Scott Morrison continued to downplay the risks as the country eases pandemic brakes, the Retuers news agency reported.

The state of New South Wales reported 2,482 new cases, the state of Victoria reported 1,504 new cases and the state of Queensland reported 31 new cases on Saturday, which together topped Australia’s previous high of 3,820 cases a day earlier.

The state’s coronavirus deaths stood at 406, with no deaths reported within the last 24 hours.

Sikkim now has 177 active cases, while 31,528 people recovered from the disease. A total of 341 patients have migrated to other states.

Delhi recorded zero deaths due to COVID-19 and 69 new cases of the infection with a positivity of 0.12 percent on Friday, according to data shared by the city’s health department.

On Thursday, the national capital registered 85 cases, the highest in over four months, with a positivity of 0.15 percent. The number of cumulative cases of the disease is now 14.42.004. Over 14.16 lakh patients have recovered from the infection.

The death toll due to the coronavirus infection in Delhi stands at 25,100.

Meanwhile, the center said Friday that 101 positive cases of the Omicron variant of coronavirus have been detected across 11 states and union areas so far, advising people to hold low-intensity New Year celebrations.

According to the government, 22 cases of the Omicron variant have been reported in the national capital to date.