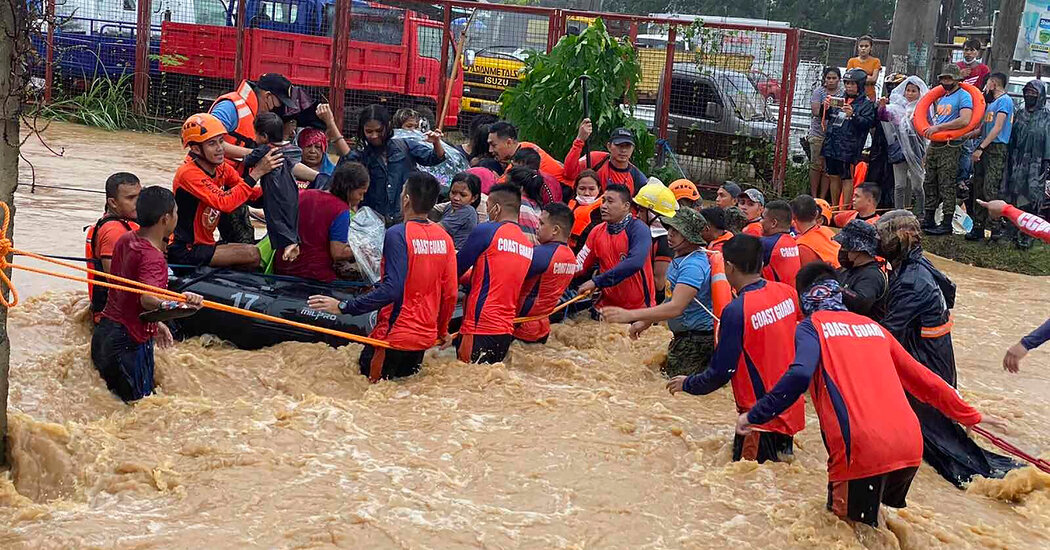 The typhoon, the 15th major storm to hit the country this year, intensified rapidly in the morning and was classified as a super typhoon, with sustained winds of 120 miles per hour near the center and gusts of up to 168 miles per hour. The term is similar to a Category 5 hurricane in the United States.

The Coast Guard said the situation in the south was dire, and rescuers reported taking a baby to safety using a plastic basin. They also used rubber dinghies to transport people to safety as the water rose rapidly in Cagayan de Oro, a town of 730,000 inhabitants on Mindanao Island cut by a major river system.

The Manila Civil Defense Office said nearly 100,000 people in several regions had been relocated to safer grounds. There were no immediate reports of injuries, but communication was disrupted in many areas, making it difficult to immediately assess the situation.

Casiano Monilla, a deputy administrator of the Civil Defense Office, said many people had been evacuated ahead of time, although there were many others who had not yet reached.

“As we speak, Odette is currently wreaking havoc,” he said, using the local name for the storm (Rai is the international). “When our on-site teams are allowed to provide data, we will be able to inform everyone.”

The storm threatened the lower reaches of the Visayas, one of the Philippines’ three main archipelagos. It was predicted to go out into the South China Sea before Saturday.

In the Dinagat Islands in the Visayas region, Governor Arlene Bag-ao said mandatory evacuations had been underway since Wednesday. Rain had fallen over the area for two weeks before the storm, increasing the risk of landslides to the risk of flooding.

“That is why we are afraid; our soil is already soft, ”said Ms. Bag-ao to journalists.

In the province of Northern Samar, also in the Visayas, Governor Ben Evardone reported that people were so used to typhoons that they initially refused to leave their homes.

“Some of them were subjected to forced evacuation because it is already dangerous; we are experiencing strong winds and heavy rain, ”he said. The telecommunications lines were down and the electricity in the province was spotty at best.

Richard Gordon, a senator who is also the chairman of the Philippine Red Cross, said the coronavirus pandemic had made preparations doubly tough.

The Philippines sits on the so-called typhoon belt and is typically hit by about 20 storms in a year, some devastating.

The most powerful super typhoon to hit the Philippines was Haiyan in 2013, leaving more than 6,500 people dead or missing.