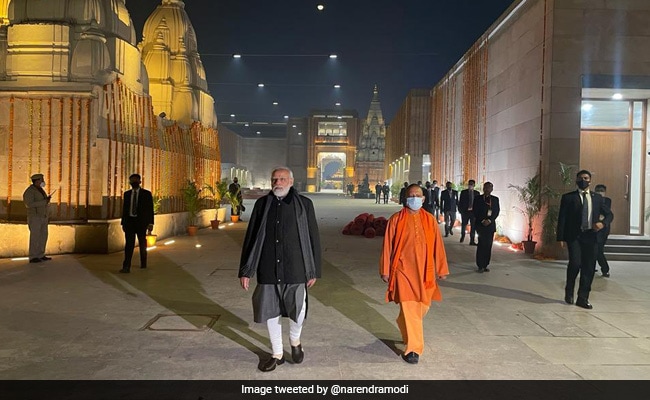 Prime Minister Narendra Modi held a meeting with Prime Ministers of BJP-ruled states until midnight Monday and went on a late night “inspection” in his constituency Varanasi in Uttar Pradesh after an action-packed day where he inaugurated the first phase of the mega Kashi Vishwanath temple corridor . A series of tweets issued by Prime Minister Modi late last night included Prime Minister Yogi Adityanath by his side as they toured the city.

Inspection of key development works in Kashi. It is our endeavor to create the best possible infrastructure for this holy city. pic.twitter.com/Nw3JLnum3m

The photographs that the Prime Minister had posted showed Yogi Adityanath with him as they visited parts of the city and Banaras railway station.

Next stop … Banara station. We are working to improve the railway connection as well as ensure clean, modern and passenger-friendly railway stations. pic.twitter.com/tE5I6UPdhQ

In the morning, it had been pretty much a solo affair for the Prime Minister as the pictures showed him praying prayers at the Ganga and performing rituals at the Kashi Vishwanath Temple before launching the temple corridor. He also showered construction workers involved in the project, flowers and later shared lunch with them.

While today’s events indicated that the Prime Minister would be the BJP’s main face for the crucial elections in the Uttar Pradesh Assembly next year, the night’s photographs sent a message that Mr Adityanath would also be a key figure in the party’s campaign.

The photographs also appeared to send a message that Mr Adityanath has the backing of the Prime Minister as the party plays its “dual-engine government” plank in the run-up to the polls.

The BJP has also demonstrated unity through the Varanasi events as all of its prime ministers from across the country reached the temple city for the major events. The Prime Minister also held an audit meeting with them.

On day 2 of his visit, the Prime Minister will attend a program at a famous temple complex on the outskirts of Varanasi before returning to Delhi.