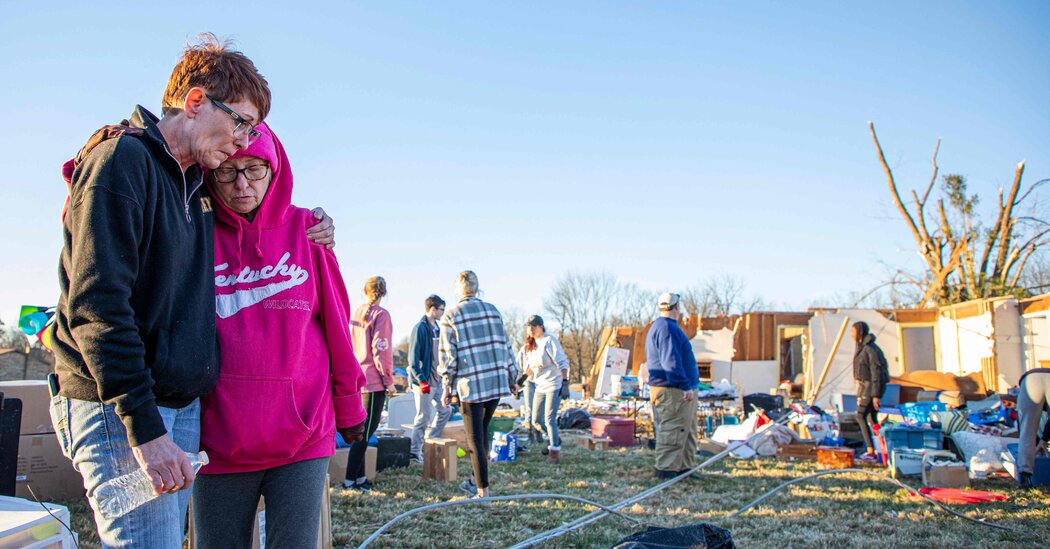 The deadly tornadoes that hit six states on Friday killed more than 80 people, leaving dozens missing, came at the end of a year of worsening extreme weather events, from heat waves and hurricanes to floods and forest fires.

Scientists have been able to draw connections between a warming planet and hurricanes, heat waves and droughts and attribute the likelihood of climate change playing a role in individual isolated events. The same cannot be said about tornadoes yet.

“This is the most difficult phenomenon to link to climate change,” said Michael Tippett, an associate professor of applied physics and mathematics at Columbia University, who studies extreme weather and climate.

Although scientists are discovering trends around tornadoes and their behavior, it is still unclear what role climate change plays. “For many of our questions about climate change and tornadoes, the answer is that we do not know,” said Harold Brooks, a senior researcher at the National Oceanic and Atmospheric Administration’s National Severe Storms Laboratory. “We see no evidence of changes in the average annual incidence or intensity over the last 40 to 60 years.”

What causes a tornado?

Tornadoes form in large rotating thunderstorms, and the ingredients must be just right. Tornadoes occur when there is a perfect mix of temperature, humidity profile and wind profile.

When the air is unstable, cold air is pushed over warmer humid air, creating a draft when the hot air rises. When a wind speed or direction changes over a short distance, the air inside the clouds can start to spin. If the air column begins to rotate vertically and rotates near the earth, it can intensify the friction on the Earth’s surface, accelerate the air inward, and form a tornado.

How are they measured?

Like hurricanes and earthquakes, tornadoes are rated on a scale. Enhanced Fujita, or EF, the scale goes from 0 to 5.

The tornado, which traveled across northeastern Arkansas, Tennessee and western Kentucky over the weekend, was estimated to be three-quarters of a mile wide with wind speeds peaking between 158 and 206 miles per hour, giving it an EC rating of at least 3.

Because it is challenging to measure the wind in a tornado directly, surveyors usually assess tornadoes based on their level of damage to various structures.

For example, they can check to see if the damage is limited to missing roof shingles, or if entire sections of roofs or walls are missing. Based on the level of damage, the researchers reverse-construct the wind speeds and assign a tornado an assessment of the scale.

Have tornadoes changed over the years?

Researchers say that in recent years tornadoes appear to occur in larger “clusters” and that the region known as the tornado spawn on the Great Plains, where most tornadoes occur, appears to be shifts to the east. The total number of tornadoes per year remains stable at around 1,200.

Tornadoes in the United States in December are unusual. They typically occur in the spring. Friday’s tornadoes may have occurred because the wind speed was high (it tends to peak in winter) and the weather was warmer than usual. This year, the region has experienced an uncharacteristically hot December, and temperatures in Arkansas and Kansas were Friday in the 70s and 80s.

Is climate change the cause?

The ingredients that give rise to tornadoes include warm, moist air at the ground surface; cool dry air higher up; and wind displacement, which is the change in wind speed or direction. Each of these factors can be affected differently by climate change.

As the planet warms and the climate changes, “we do not think they will all go in the same direction,” said Dr. Brooks from NOAA. For example, the total temperature and humidity, which provide energy in the air, can increase with a warming climate, but wind shear can not.

“If there is not enough displacement to make something rotate, it does not matter how strong the energy is.” he said. “If there’s all kinds of gusts of wind, but you do not have a storm, you do not get a tornado either.”

While we know that climate change may play a role in making some storms more powerful, the complexity of tornadoes means that it is difficult to extend this connection with security, especially for an individual event.

The relatively small size of a tornado also makes it harder to model, the primary tool that scientists use when attributing climate change to extreme weather events. “We work on such small scales that the model you would use to do the attribution surveys just can’t capture the phenomenon,” said Dr. Brooks.

The tornado record is still sparse compared to other types of events. One possible reason is that tornadoes are relatively local weather events. Tornado records have largely been based on someone having seen a tornado and reported it to the National Weather Service. This means that minor tornadoes that occur in rural areas and do not cause property damage or personal injury may not be reported.

“We’m pretty sure we know how many hurricanes land in the United States each year,” said Dr. Brooks. “With tornadoes, we may not know how many happened yesterday and last night.”

Another kind of link

A 2015 paper found that La Niña conditions, as those we experience now, and who most likely will prolong the western drought, are more favorable for tornado activity. Dr. Tippett, one of the study’s authors, said the observable relationship between the two was modest, though a “slightly smaller reservation” than the relationship between tornadoes and climate change.

Still, Dr. Tippett that based on all the evidence, computer modeling showed that the environmental conditions favorable to tornadoes may increase in the future. “Our confidence is low, but the evidence points in the same direction.”