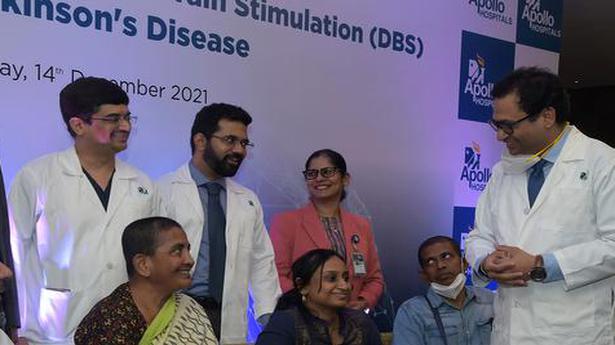 Treatment can help patients with Parkinson’s and reduce dependence on medication: neurologist

“We are in an era of precision DBS,” said Vijayashankar Paramanandam, neurologist, movement disorder and DBS specialist, Apollo Hospitals. The best candidates for DBS included patients with tremors and difficulty walking with at least four years of symptoms and four months of motor complications.

The use of advanced brain sensing technologies helps with individualized monitoring for efficacy that maximizes therapeutic outcome, he said. He added that it could help improve the condition of patients who have symptoms such as tremors, stiffness, slowness in daily activities, dyskinesia. It can also help reduce the medication.

The team with advanced movement disorders at Apollo Hospitals performed five DBS surgeries last month. This included four patients with Parkinson’s and one with dystonia, according to a press release.

“The procedure involves placing two electrodes deep into the target area (of the brain) using advanced computer-aided path planning and stereotactic machinery. The patient will be awake and responsive,” he said.

“The second phase of the procedure involves placing the battery in the chest. The stimulation starts two weeks later,” he added.

He added that compared to medication, DBS provided long-term improvement.

In this, a wire that goes from under the skin connects the pacemaker-like device to the electrodes inside the brain. The electrical impulses from the device alter the electrical activity in the affected areas of the brain to produce the desired effect and improve the symptoms. An external programmer is used to adjust and deliver electrical stimulation to the brain.

VR Roopesh Kumar, senior consultant and senior neurosurgeon, said there had been a huge improvement in neuroscience compared to where it was 30 years ago.

Preetha Reddy, vice president of the Apollo Hospitals Group, said in the announcement that the hospital had performed DBS for 14 years and it was a well-established treatment for patients diagnosed with advanced Parkinson’s disease and was now used for many other neurological indications with good success. Venkatachalam, director of medical services, Apollo Hospitals also spoke.